burgers
Add to FavoritesSaved! Jump To Recipe
Find What You Are Looking for Quickly Collapse Table of Contents
1 IT'S NO SECRET... I love hamburgers. The APPLE SAUCED BURGERS are my absolute favorite.
2 Apple Sauced Burgers 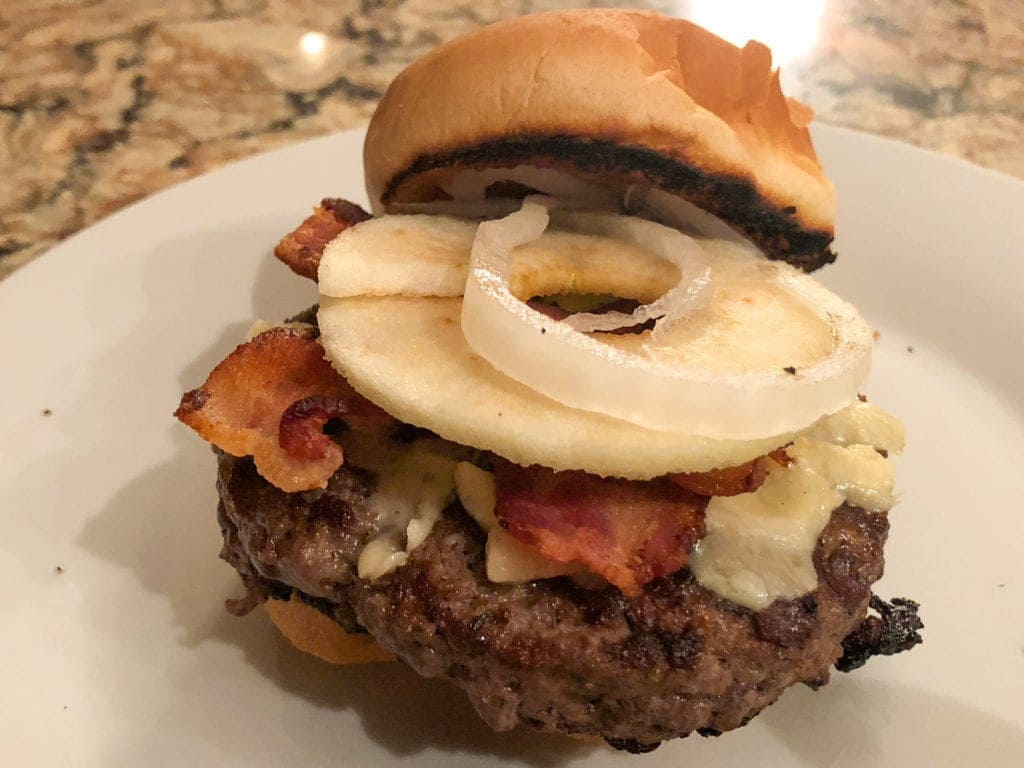 IT'S NO SECRET... I love hamburgers. The APPLE SAUCED BURGERS are my absolute favorite.

IN KNOXVILLE, TENNESEE, there is a restaurant called The Stock & Barrel that Louise and I stumbled upon on a motorcycle vacation a couple years ago. We try to take a couple long rides every year, and FOOD is obviously one driving force in where we end up after a day on the road. When we arrived in Knoxville on this particular trip, I was craving a hamburger (surprise). Louise is good at finding the best restaurants, gastropubs, and holes-in-the wall. The Stock & Barrel specializes in burgers and bourbon, so I was totally on board with her suggestion.

One of the many interesting burgers on their menu is "The Elvis," with peanut butter, fried bananas, and bacon. I liked it so much, that I started making them at home. Once in a while, we make a standard bacon cheeseburger with the usual fixings, but we normally try different recipes. For quite some time, the Elvis Burger was my go-to.  Then Louise created her Apple Butter Bourbon BBQ sauce and that changed everything. We put our heads together and came up with the recipe for Apple Sauced Burgers. While I still love to experiment with different hamburger ideas, this is my current fave.

The BBQ sauce recipe is a closely-guarded secret, but maybe you can talk Louise into sharing - that's what the LEAVE A REPLY section below is for. You can always substitute apple butter or make up your own sauce. A quick Google search will point you in the right direction.

I finally gave in and released the recipe for the Apple Butter Bourbon BBQ Sauce and it's so good, I hope you give it a try!

After deciding on the Apple Butter Bourbon BBQ sauce as a starting point, we started to build up from there. Immediately, we knew that apple slices would be perfect for flavor and crunch. I like Granny Smith apples and they work perfectly. To prep the apples, I like to use the Pampered Chef Apple Peeler, Corer & Slicer. This is the coolest gadget in our kitchen (my opinion). Louise has had this thing for more than a decade. Not only is it amazingly efficient for its simplicity, it looks good enough that we just leave it out on the kitchen window sill. It's also perfect for slicing apples to use in a cobbler (hint, Louise).

Next up, was the cheese selection. We knew we wanted to use sharp cheddar. Don't overthink the cheese (there is no real difference in flavor between white cheddar and yellow cheddar). We like a sharper cheese, so that's the reason we used Black Diamond Mature Reserve... plus we had it on-hand. While I'm on the subject of cheese, here's a little burger tip: don't put the cheese on the meat while it is cooking/grilling. I put the cheese on top of the hamburger patty as soon as it comes off the heat to rest. The cheese will melt, it keeps its flavor when I do this.

Before we get to the actual recipe for Apple Sauced Burgers, let me point out a few other specific ingredients we use.

Before we get to "the meat of the matter," let's do a little mise en place (prep). I use Vidalia onion and I like it sliced super thin. The cheddar I used this time sort of crumbled under the knife, resulting more in chunks than in slices, but I was happy with the result.

Now, it's time to play with the Pampered Chef Apple Peeler, Corer & Slicer. It's pretty easy to use and makes perfect apple slices.

We are up to my favorite ingredient: bacon. This is pretty straight-forward: cook it completely, don't burn it, and always pat the excess oil from the bacon after it is cooked.

Time to form your hamburger patties. I weighed them out at an even half-pound this time, but we've also done them as sliders (using Hawaiian Sweet Dinner Rolls for the buns).

We like to season the meat on the outside only. I use the Million Dollar Rub and just sprinkle about a half teaspoon on both sides of each patty - just enough to lightly cover the surface of the meat.

I honestly can't remember the last time I used my outdoor BBQ grill. Not just because we are still in the middle of winter, but because I have found that, by using grill pans, I have more control of temperatures and timing.  This holds true for steaks, too. Louise recently brought home the Pampered Chef Executive Nonstick Square Grill Pan. For the longest time, I was using a similar (smaller) grill pan with good results. This new grill pan is a total game-changer. The first time I used it was on these Apple Sauced Burgers. Just look at those grill marks. And I know it sounds cliché, but cleanup was a cinch.

With the burgers cooked to your preferred doneness, remove them from the grill pan (or grill, or pan) and allow them to rest for a few minutes. This is the time to put the cheese on top so it can start to melt.

Finally, lightly toast the buns, spread about a teaspoon of sauce on the inside of both halves, and begin stacking. I like the meat on the bottom, followed by the cheese, bacon, apple, and onion. That's it. Simple and delicious Apple Sauced Burgers. 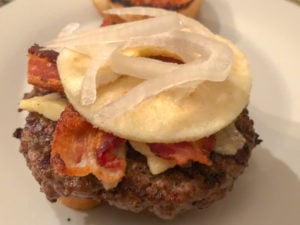 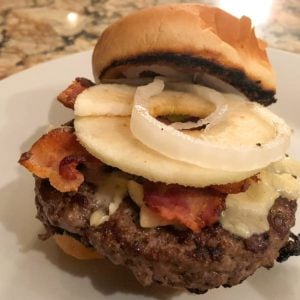 Cuisine American
Tried this recipe?Let us know how it was!
« Lime-Marinated Flank Steak with Roasted Vegetables
Corned Beef Cabbage Rolls »