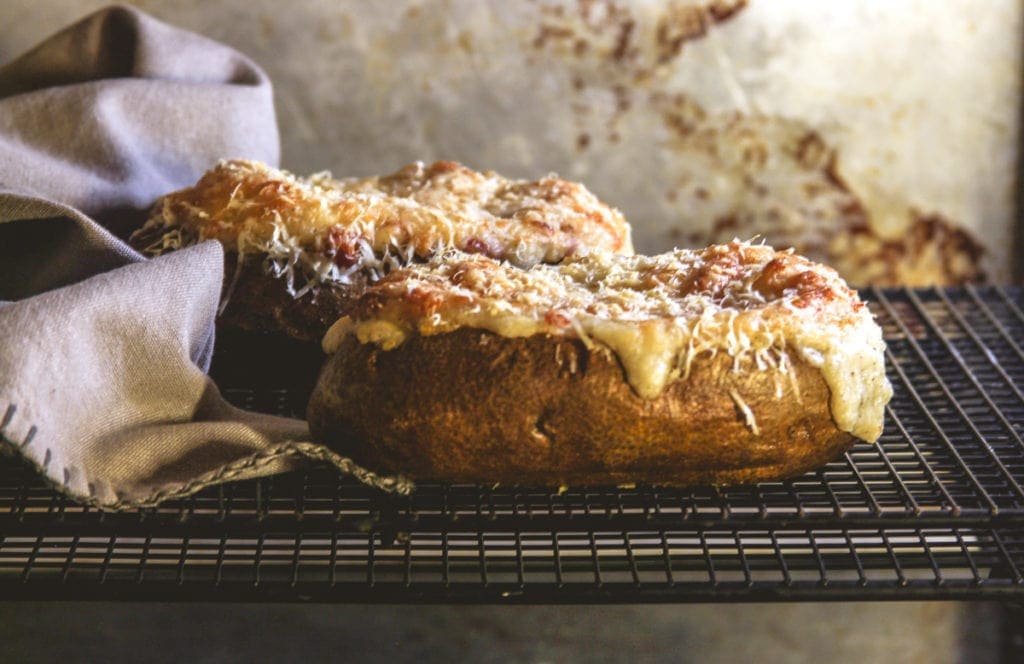 No one that I know. Sure, we might not eat this way all the time or maybe you do and that's just fine too... but from time to time we just have to say YES to all this delicious goodness.

And there is no better way than to dive into one of these twice-baked potatoes with 4 different cheeses and one very special ingredient.

What's the Best Potato to use for Twice-Baked Potatoes?

My husband, Jeff, loves... and I mean LOVES... all things potato. Kind of like how Marylanders love their crab. Jeff, having lived in Idaho and having an Uncle who was a potato farmer, also knows his potatoes.  More specifically, he knows his Idaho Russet potatoes.

I can send him into the store to buy a tomato and he might bring me one with mold or spots, but if I ask him to pick out the potatoes he will find the absolute best ones in the pile without any effort. I'm not even joking, the kid has some serious potato talent.

We can be walking through the produce aisle (not a thought of potato in our heads) and his eyes will immediately focus on the biggest and best looking potato even if it's mostly buried under a pile of other not-so-perfect potatoes! Most of the time we walk on by, leaving that perfect potato alone... but every once in awhile we splurge!

For baking or frying I recommend buying Russet potatoes and Idaho Russets are said to be the best of the best. Only Russet potatoes grown in Idaho can be called Idaho Russets, makes sense right? They say the soil in Idaho is just perfect for growing the best potatoes although I'm not sure I could tell the difference. Apparently, it's a big deal though and there is even an Idaho Potato Commission that makes sure only the potatoes grown in Idaho are called Idaho potatoes. There is a seal and everything. It's a big deal - apparently, such a big deal there is a website dedicated to the Idaho Potato and even has a section called Dr. Potato. I'm not joking. Here it is if you want to delve deeper into all things potato! It's kind of fun actually. I know, I'm a bit of a food nerd. I accept it.

What Can You Add to Your Twice-Baked Potato?

Anything! That's right, customize it any which way you like. I happen to be partial to this recipe because it brings a nice balance of cheeses with prosciutto and just tastes delicious.

When we were first married, Jeff raved about his Mom's twice-baked potatoes. She would add Spam (yes, Spam!) and cheese (Velveeta... not really cheese!) to the potato mixture, stuff the potato shell and bake them. Jeff made them for me one night and although I know he was disappointed, I wasn't a fan of the Spam! I don't like it in my email inbox and I don't like it in my twice-baked potato either. Sorry, mom. Sorry, Jeff. I've probably ruined a family memory for my dear husband, but I will not eat Spam, no ma'am. Now, ham... I'll try ham.

Probably a year had passed and we had not revisited the twice-baked potato until one weekend when we were both in the store, a potato caught Jeff's eye... yes, that really happens with him! Talent. Pure talent. So, of course I had to hurry up and decide which ingredients I needed for my version of the Ultimate Twice-Baked Potato. I did and this recipe was born that night. It's really simple and feel free to change it up if you want, but remember... use butter.

What is Prosciutto and Why Use it in Your Twice-Baked Potato?

I chose prosciutto because it is very thin and sort of melts into the potato mixture leaving its flavor without much texture. This keeps the potato really creamy without chunks of ham (or Spam). You could use bacon, but you will have to cook it first and then your perfectly cooked and crunchy bacon will become soft when the potato is baked, so it seems like a waste of time and mess to cook the bacon.

If you want to use ham instead of prosciutto, I recommend getting deli style ham sliced thin. Of course if you want chunks of meat in your potato, that's fine too. It's all about what is most pleasing to you after all.

How Do I Know When the Potato is Done?

I will defer to my super talented husband (AKA potato master), Jeff for the answer to this question. The first thing he always says is you can smell it. You will start to smell the wonderful aroma of the baked potato waft through your kitchen. It's a glorious smell. Kind of earthy and just wonderful.

The second way you can tell is by gently squeezing the sides and see if they give. If they do, chances are your potato is done. You can also stick a fork in it (yes, I chuckled a bit when I typed that saying) and the tines of the fork should slide easily into the potato. If you meet resistance, your potato is not done.

The third method, and probably the most precise (but never used in our house) is using a meat thermometer. Insert the thermometer into the potato and if it reads 210° Fahrenheit, it's done. I got that direct from Dr. Potato!

You can over-cook a potato. Just ask Jeff! I have to share the funniest potato story going back to when Jeff and I were first married. Keep in mind, he knows potatoes. What he doesn't know is timing. Specifically how long to cook a potato in the microwave. Now, in all fairness, he probably never cooked one in the microwave since the oven is definitely the preferred method for him. He was hungry and in a hurry and put the potato in the microwave for 25 minutes! At about minute 21 or so, we smelled this horrific smell. I honestly wasn't paying attention and had no idea he put it in for that long. I asked him how long he set the time for and when he told me, I said some words that I just can't say here. We ran into the kitchen opened the microwave, waved away the smoke that was trying to suffocate us. The smoke detectors started going crazy and Mr. Potato was no more. He was reduced to a black smoldering mess of carbon. Well, it looked like carbon. I kid you not. We still laugh over that one.

If you overcook your potato in the oven it will become very dry and eventually I guess it would end up just like Jeff's microwaved one!

Okay, let's get to prepping the most delicious potato ever!

What you'll need for the Ultimate Twice-Baked Potato: 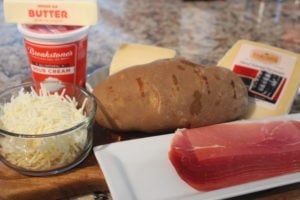 Preheat oven to 400°  Fahrenheit. Select a large uniform Russet baking potato. I used one 2 lb potato, but you can use two 1 lb potatoes if you'd like. Wash the potato thoroughly and, using a fork, poke the potato 3-5 times on each side. This allows the steam to escape and prevents your potato from cracking open during the baking process. Place potato directly on oven rack and allow to bake 60-90 minutes depending on the size of your potato. Remove from oven, turn heat down to 350 degrees Fahrenheit. Cut the potato in half lengthwise and allow to cool slightly. If using smaller potatoes, you can cut just the top (about ½ inch down) and use that for a potato skin appetizer. 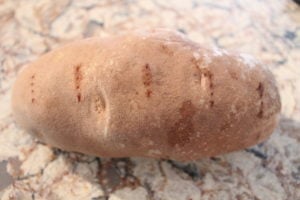 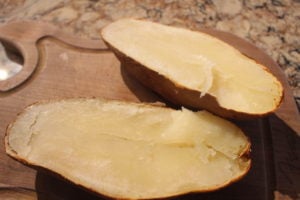 Using a spoon, remove the potato flesh and place into a medium size bowl. I leave about ⅛ of an inch of potato lining the skin for stability. Add butter, sour cream, salt and pepper to bowl and using a hand mixer, mash the potatoes. The mixture is going to be like a thick dense mashed potato. I always give it a taste at this point and add in more butter or sour cream if you think it needs it. It's your splurge... add what you want!  Chop the prosciutto and add to bowl. Add Italian style cheese blend and ½ of the Asiago.  Mix well. Salt and Pepper to taste, if needed. 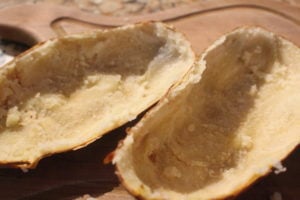 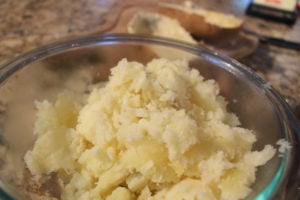 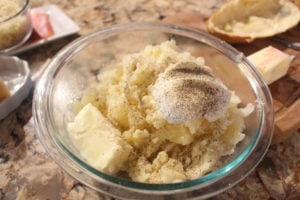 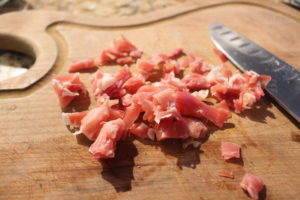 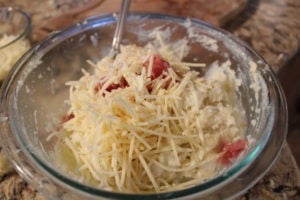 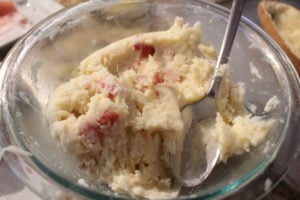 Place potato skins on a baking tray and stuff them with the potato mixture. Now, if you are anything like me...you'll come up short! I always taste WAY too much of the potato mixture and have to make do. It' s alright, no one will know...just divide the mixture you have between all the potato skins and call it a day. Top potato with freshly grated Parmesan and Asiago cheeses. I like to use a fine grater and make a mound of cheese that, when baked, will create that golden brown cover of yum! Place potatoes on a baking pan (lined with parchment for easy clean up) and put them back in the oven (on 350 degrees). Bake for about 30 minutes or until the cheese has melted and is golden brown. Remove from Oven. Serve and Enjoy! 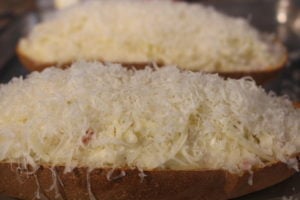 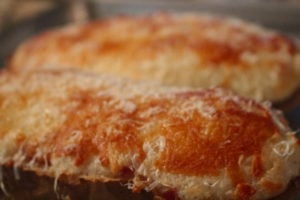 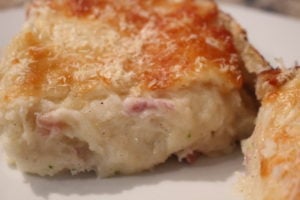 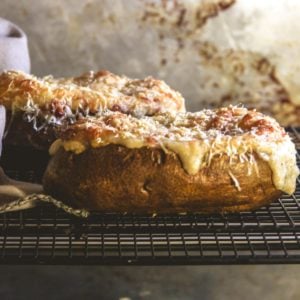 Initial Baking Time will vary depending on size of potato or the number of potatoes you are cooking at one time. I've found 90 minutes works perfectly for a 2lb potato and about 70-75 minutes for a 1lb potato.