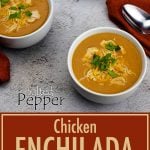 Have you ever had that perfect bowl of creamy chicken enchilada soup, where all the flavors and textures are spot on? If not, you are in for a treat!

If you have, then you know exactly what I'm talking about. The perfect bowl of enchilada soup is a velvety consistency that is both creamy and flavorful and it has perfectly cooked chicken to add some texture. YUM!

The only problem is, Jeff said mine wasn't good enough! WHAT?

"It's perfect." I said. "It's creamy, it has that wonderful taste of corn, it's perfectly spiced and it's super easy to make!" What more could you want?

Jeff said, "Sorry, it isn't good enough. The perfect enchilada soup has chunks of chicken, not shredded to the point of being almost nonexistent."

Well... he knows his enchilada soup better than I do because he has eaten about 1,000 bowls of it from Chili's and other restaurants. So, I made it the way he wanted me to and now he says, "It's better than Chili's Chicken Enchilada Soup!" YAY!

Can I double the recipe?


Yes. Just pay attention to the HOT max fill line on the blender. If it looks like you are getting too close to it, leave out some of the chicken stock and mix it in at the end.

Can I use already cooked chicken?


Absolutely! You can use any kind of cooked chicken you like and I will go over the details a little later in the post because the steps will look a little different.

Do I use Red or Green Enchilada Sauce?


Red. At least that is what I used and it is so delicious.

Can I omit the Chicken?

Of course! Switch the chicken stock to a vegetable stock and omit the chicken. The soup will be just as delicious!

Can I substitute cornmeal for masa harina?


I'd love to be able to say yes, but I have to say no. I tried it and it just didn't work. The flavor isn't the same and the texture was very gritty with cornmeal.

What is Masa Harina?

Masa Harina a corn flour that is finely ground and prior to being ground, the dried corn is soaked in water and an alkaline agent called slacked lime. While this doesn't sound too appetizing, it gives the masa harina a distinctive taste and cornmeal even if if you finely grind it, just isn't the same.

I don't recommend skipping this ingredient when making the creamy enchilada soup. It makes all the difference!

Masa Harina is usually available at the grocery stores, so it shouldn't be hard to find. If you don't use it often, I would store it in a sealed container in a dark cool pantry and it will stay good for 9-12 months.

The most common brand that I see in stores is Maseca and it says instant corn flour. That is the one you want.

Can I just dump all the ingredients in and select the Hearty Soup Funcion?

Since you probably don't want to bite into the stems or chunks of onion when you serve the soup, this is what I would do to make this a dump and go soup.

Add in the chicken broth (all of it), the spices, jalapeno, cilantro stems or leaves, and the onion. Select the extract button which will blend everything up nice and smooth.

Add in the cubes of chicken and select the hearty soup function. Done.

Top with desired garnishes and serve.

How to make the Enchilada Soup with Leftover Chicken

When I started testing this recipe, it was with the idea of using leftover chicken that I had from making Mexican Shredded Chicken. I love the idea of making a large amount of something and then turning it into different meals throughout the week.

To make this soup with leftover Mexican Shredded Chicken, I used both the broth and the chicken. So, instead of adding seasonings, I let the broth from the chicken recipe be the base of my soup. It was delicious and so fast because the chicken was already cooked and well seasoned.

If you have leftover Mexican Shredded Chicken with the broth, this is what you do.

Add in 2 cups of the broth, 1 cup of enchilada sauce, ½ cup masa harina and pulse blend. Heat on manual high for about 10 minutes and then select the extract button.

*I really recommend making your own enchilada sauce right in the blender. It's so good and makes this soup perfect! Here is my recipe, made right in the Ninja Foodi Cold & Hot Blender: Homemade Enchilada Sauce

Add in as much chicken as you want and heat on manual high for about 5 minutes.

If you want to use leftover chicken that was not made specifically with Mexican flavors, you can do that as well.

I would add in the chicken stock, cilantro stems, jalapeno, spices, and onion. Blend those using the extract button. Heat on manual high until boiling.

Then add in the enchilada sauce and the masa harina. Pulse blend to combine. Cook on manual high for about 5 minutes. Select the extract function to ensure a smooth soup.

Add in your leftover chicken and heat on manual high for a few minutes or until the chicken has warmed up.

If you are like Jeff and want chunks of chicken in your enchilada soup, here is how I did that in the blender.

After I rewatched the video, an idea to make this even easier came to mind and while I haven't had time to test it this way, I wanted to share it with you because it might make it just a tad easier.

When you add the chicken stock, onion, jalapeno, spices, and cilantro, use the extract button to blend it up before putting in the chicken. This way when you go to strain the chicken out of the broth, you don't have to pick those things out to put back into the broth like I did.

Here is the way I tested the recipe

Add the chicken stock (you can add the entire amount), jalapeno pepper, onion, spices, and cilantro stems or leaves. I use the stems because they work perfectly and that is the part we usually throw away!

Cut the chicken into 1" cubes and add to the blender. Use the tamper or long spatula to press the ingredients down into the liquid the best you can. Select the manual cook mode on high. Allow to cook 15 minutes or until the chicken is done.

When the chicken is fully cooked, strain out the broth and add it back into the blender. Pick out the cilantro, onion, and jalapeno pepper and add to the blender. *see suggestion above to avoid this part.

Add in the masa harina and pulse blend a few times to get it incorporated. Scrape down the sides as needed. Select the manual cook mode on high and cook for 5-10 minutes. Select the extract button and allow the blender to make this enchilada soup nice and creamy.

Add back in the chicken and serve or simply place the chicken cubes in a bowl and pour the soup over top.

Garnish with desired toppings and serve. I love to add cheese, extra cilantro and even some thinly sliced jalapenos. Dress it up any way you like! 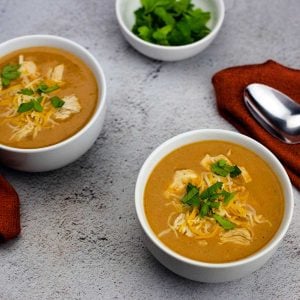