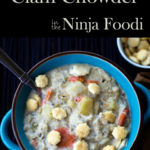 Whenever I see Clam Chowder on a menu, I want to order it... but I don't. I'm always disappointed in the flavor or the clams are too chewy.

Unless, of course, I am in Cape Cod. There are some great New England Clam Chowders to be eaten in Cape Cod!

I ordered Clam Chowder years ago and thought they messed up my order when a bowl of red soup was delivered to the table. It was then that I learned about the second kind of clam chowder called Manhattan Clam Chowder. It's not my cup of soup, so to speak, but people love it. Unless, of course, you are a New Englander.

How many types of Clam Chowder are there?

Based on my research, there are 5 types of Clam Chowder, but the best one, hands down, is #5!  I would debate whether Rhode Island and #2 style clam chowders are chowders at all, but that's a topic for another day!

A wonderful way to present and serve this delicious New England Clam Chowder would be in a bread bowl! You can make a bread bowl in the Ninja Foodi by following my recipe for Homemade Bread.

After the bread has cooled. Cut the top off and remove the bread from the center. Be sure to leave at least an inch or two of bread so the chowder doesn't leak out. Ladle the soup into the bread bowl just before serving.

Use the bread you removed  for dipping in the chowder.

Yes, you can! My mom has been freezing clam chowder forever and it always tastes just as good as the day she made it.

Make sure your clam chowder has cooled completely before freezing to avoid ice crystals from forming which can cause freezer burn.

Sometimes when you freeze cream based soups they separate. The best way I found to reheat this New England Clam Chowder is by using the magical Ninja Foodi on steam and here is how you do it!

How to Reheat New England Clam Chowder from Frozen

Place the frozen clam chowder in an 8" cake pan or other heat resistant container and cover with foil. I like to use the Fat Daddio 8" cake pan. I usually freeze my chowder in a freezer baggy and just cut away the baggy with clean kitchen scissors.

Put the cake pan on the rack and add 2 cups of water to the inner pot. Put the pressure lid on and turn the Ninja Foodi on steam (make sure the valve is to vent) and set the time for 20 minutes. This will thaw and warm your soup. Give it a stir and Enjoy!

The first thing I always recommend is to prep your ingredients. This will allow you to work quickly when making the Clam Chowder. The first step is to make the roux.

Add 6 Tbsp of flour and stir to combine. Cook for 2-3 minutes to burn off the flour taste. If the roux is too thin and has a lot of shine from the butter, add in 1-2 Tbsp of flour and incorporate. The roux should have the consistency of a thick paste.

The roux will be a very light tan color when it is done. Turn the Foodi off and remove the roux. We will add this in after the pressure cooking is complete.

Then slice the carrots into thin slices about ¼- ½". Dice the potatoes about ¾" to an 1" dice. Dice the celery and the onion into ½" dice. Drain the clams and reserve the juice. Put the clams into the fridge until you are ready to add them.

Add 2 Tbsp of butter to the inner pot and sauté onions, carrots, celery, and potatoes for about 1 -2 minutes.

Add clam juice, water, liquid from drained clams, fresh thyme, bay leaf, ½ tsp salt, 1 ½ Tbsp clam base and the roasted garlic. If your garlic is still warm, you can press the bottom together and the individual cloves will pop out. If it has cooled, you will need to remove each clove and put into the chowder. Stir to combine.

Place the pressure lid on and turn the valve to seal. Set the pressure to high for 2 minutes. When done cooking, immediate release the pressure. Open the lid and remove the bay leaf.

Turn the Ninja Foodi on high sauté and add in the roux and the baby clams. Stir for about 2-3 minutes. The soup will thicken as the roux is incorporated.

When the clam chowder has thickened, add in 1 cup of heavy whipping cream and turn the Ninja Foodi off.  Stir to combine. Serve & Enjoy! 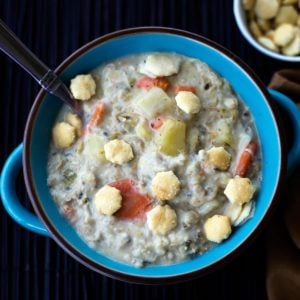