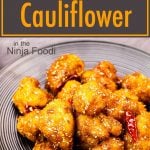 You can have the PERFECT Air Fried Cauliflower right at home! I tossed the cauliflower in a General Tso's Sauce, but you can use any sauce you like!

During one of our vacations, Jeff and I stopped in this little restaurant and ordered the General Tso's cauliflower. Neither one of us could believe how delicious it was and Jeff asked me if I could make it at home.

I said, no, not really. I mean I could, but I hate deep frying at home and I don't do it. That was long before the Foodi came into my life. While I was testing out a recipe for Air Fryer Chicken Nuggets, Jeff asked me again if I could make General Tso's Cauliflower.

Hmmm. Yes, I think I can! So, the testing began. At first, I used the chicken nuggets to test the General Tso's sauce and while it was tasty, the sauce wasn't right. I had tried to make my own Hoisin sauce and it just didn't give the flavor we expect from a General Tso's sauce.

I almost never buy prepared sauces, but I decided to pick up some hoisin sauce and that did the trick. This recipe is so easy to make and you will feel like you are eating at a restaurant!

Can Air Fried Cauliflower be made ahead of time?


I found that they are best eaten right after you make them. You can leave them on a cooling rack for 20-30 minutes before tossing in sauce, but any longer than that and they start to lose their crunch.

Can you reheat the air fried cauliflower?


Yes, you can, but they are better when freshly made. If you need to reheat them, I would suggest not tossing in sauce. When you are ready to toss them in a sauce or just eat them plain, air crisp on the highest setting (preheat first) for 5 minutes or so to crisp up the outside.

Can I make a double batch?

Yes, you can. You will need to air fry in batches, but the cauliflower is fine on a cooling rack while you wait for the second batch to be done. Don't toss in a sauce until you are ready to serve them. If you are making a double batch of the General Tso's sauce, I recommend not doubling the hoisin sauce. Instead, add it to taste. I found that when I doubled it, it was too prominent of a flavor.

Can I Make This Recipe Low Carb?

The General Tso's sauce would be a hard one to make low carb, but with some experimenting you probably could come close or create a low carb sauce that you like just as much.

You can certainly skip the General Tso's sauce and use a low carb buffalo sauce or another type of sauce that you love.

To make the breading low carb, you would use crushed pork rinds instead of bread crumbs.

As far as the batter goes, I would experiment with a little coconut flour instead of the regular flour. Keep in mind that coconut flour is VERY absorbent, so start with just a tablespoon until you get the consistency you like.

I've been working on a low carb Air Fried Mushroom and have been experimenting with the batter. It is a fine balance to get the ratios correct without having a weird taste from the coconut flour. When I get it right, you will be the first to know!

If you try it and love it, please let me know!

Can I use Chicken instead of Cauliflower?

Yes, you can. Originally, I wanted to put out the General Tso's Chicken recipe out before this one, but I ran into some issues perfecting it.

So, while I continue to work on that, I will share what I have learned so far.

I used my basic chicken nugget recipe and replaced half of the bread crumbs with panko for more of a crunch. That worked just fine.

What didn't work just fine is doubling the General Tso's Sauce. Since General Tso's chicken is usually served as a meal with rice, you WANT extra sauce!

When I doubled the sauce recipe, it was too overpowering. I haven't had time to experiment with it, but I think it was the hoisin sauce. My suggestion is to double the other ingredients, but leave the hoisin sauce the same as you would for a single batch. Taste it and then add more to your liking.

I will continue to work on the recipe for General Tso's Chicken and when it's perfect, I'll write it up! Until then, have fun and experiment. Be sure to let me know if you make a winning double batch of sauce!

Can I Air Fry Various Vegetables?

Sure, but keep in mind that different vegetables require different types of batter or preperation.

For example, these Fried Green Tomatoes worked best when I dehydrated them for a few minutes first. This allowed the breading to stick better and when cooking, the liquid didn't come out of the tomatoes which would make for a soggy crust.

Eggplant would also benefit from a little dehydration or at the least, sprinkle salt on the slices and let them sit on paper towels to draw out the moisture.

Carrot sticks are a little firmer than cauliflower and would require a longer cook time, so adjust your temperature down so you don't overcook the breading.

For veggies like zucchini or squash, I would coat in flour before dipping in the wet batter because these vegetables are full of liquid and will need something to absorb it before it softens the breading too much.

Mushrooms are what I'm battling now! I really want to make a Low Carb version, but it's proving a little difficult with coconut flour. The taste is simply too weird for me. However, I think coating them in flour would work just fine, then dip in the batter and breading. Let me know if you try it!

Can I make Air Fried Cauliflower in any Air fryer?

Yes and the technique would be the same as in the recipe. The only thing that might change is the temp and time.

I make this recipe in the Ninja Foodi Grill and set the temp the same and I had full browning in 15 minutes, but the inside wasn't quite done.

I haven't tested this recipe in other air fryers, so you will just have to judge the time based on browning. My suggestion is to cook for 18 minutes no matter which air fryer you are using and adjust your heat as needed to get the perfect crunch and browning.

You probably know by now that I love the Ninja Foodi! The air fryer feature is one of the best things about it. It's simply amazing how well these air fried cauliflower turn out, they are just as good as deep fried.

I usually start out by making the sauce. You can do this in the inner pot of the Ninja Foodi or on the stove.

Combine all the sauce ingredients along with the water, but reserve 1 Tbsp of the water for later when we make the cornstarch slurry. Turn the Ninja Foodi on high sear/sauté and bring to a boil. Stir frequently while boiling until the sauce begins to thicken. This takes about 5 minutes.

I scrape along the bottom of the pot and when the mixture is slower to move back together, it has started to thicken and it is time to add the slurry.

Mix the cornstarch with the water and mix well to make a slurry. Pour it in the pot and continue to boil while stirring constantly until the sauce becomes thick. This only takes a few minutes.

The sauce is ready when you can scrape along the bottom of the pot and it stays separated for a while. Once the sauce has thickened, pour it into a container until after the cauliflower is air fried and rinse out the pot.

In a shallow container, mix the panko and ½ cup of flour.

In a bowl, lightly beat the egg and the chili garlic sauce. Pour into a second shallow container and add the water. Sift in remaining ¾ cup of flour and swirl it into the egg/water mixture. You DO NOT want to whisk it in or even stir, swirl it in gently so you don't develop the gluten.

If you whisk or stir and develop gluten, the outer crust can become tough and it just isn't as crunchy or delicious.

Preheat the Foodi with the basket in on broil for a full 10 minutes. If you don't have broil (grill in the UK), then use the hottest AC setting.

Break your cauliflower into florets between the size of a quarter and a half dollar. Dip in the wet batter and let the excess drain off, then coat with the dry mix.

Set the Cauliflower on a cooling rack until they are all coated.

When the Ninja Foodi is preheated, spritz the basket with oil. Lay the breaded cauliflower in a single layer (you may need to air crisp in batches) and spritz the cauliflower with oil. Remember, if you can see flour, you will taste flour. Spritz well.

Air Crisp on 360℉/180℃ for 18 minutes, flipping once halfway through for the most even browning. I also spritz any areas of flour that I see when I flip.

Add the air fried cauliflower into the General Tso's sauce, add the sesame seeds if using and toss to coat. I usually warm the sauce up in the inner pot and use that to toss the cauliflower in, but you can use any bowl. 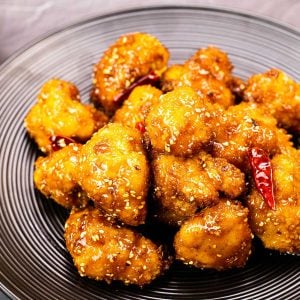