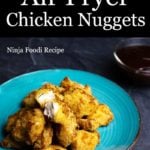 I definitely did a little dance when I finally got these homemade Air Fryer Chicken Nuggets perfected! You won't believe how easy they are to make and they are ready in no time at all!

Getting the perfect breading on Air Fryer Chicken Nuggets isn't the easiest feat, as I found out over the past several months of testing. I tried no less than 15 different techniques and, while a few of them were good, they were not always easy to do and, let's face it, if it isn't easy, no one is going to want to make them!

I didn't even set out to make Air Fryer Chicken Nuggets in the Ninja Foodi. I was working on a boneless buffalo wing recipe and happened to pop one in my mouth before coating in the sauce and I almost fell on the floor.

Well, not really, but I was shocked in a very good way! Not only were these boneless, soon-to-be buffalo wings perfectly crunchy, they were better than any chicken nugget I had ever had. I kid you not.

I would say these are very close to Chick-fil-A's chicken nuggets, but better, in my opinion!

Can I make Air Fryer Chicken Nuggets ahead of time?

Yes, absolutely! In fact, I think that is the best way to do it! Not that these Air Fryer Chicken Nuggets are great freshly made -- they are -- but, the convenience of having them already made up and frozen for those quick snacks or meals just can't be beat.

There are a couple of ways that you can make them up ahead of time and I'll go over the different ways that I have tried them.

These chicken nuggets freeze well and cook beautifully from frozen. In fact, I think they are easier because you can just dump the bag into the basket and air crisp away.

To do this, you can bread up as many chicken nuggets as you want. Keep in mind that you will most likely need more wet batter and dry bread crumbs if doing several pounds of chicken. It is fine to make up double the wet batter, but for the breadcrumbs, I would make up 1 cup at a time because it tends to get a little clumpy after a while and using fresh will give a better end result.

Once they are all breaded up, place them on tray that is lined with parchment paper and freeze for several hours. Make sure the chicken nuggets aren't touching and they are only in a single layer.

Once frozen, place them in a freezer bag and squeeze as much air out as you can. You will be able to take as few or as many chicken nuggets from the bag when you are ready to make them up. They should last in the freezer at least 3 months.

How to cook the Chicken Nuggets from Frozen

Preheat the Ninja Foodi on broil, with the basket in, for 10 minutes. Spritz the basket with oil. Dump the frozen chicken nuggets into the basket, spritz them with oil and select the air crisp function on 360°F/182°C and air crisp for 5 minutes. Flip and spritz again. Continue to air crisp for another 5-7 minutes or until they are golden brown and the internal temp reaches at least 165°F/74°C.

The most I have cooked at once from frozen is about 12, but I didn't worry about keeping them in a single layer and they cooked just fine. If you are cooking more than 12 at a time, I would toss them around more frequently to get them evenly crisped up.

Can I make them up ahead of time and refrigerate them?

Yes. You can refrigerate the freshly breaded chicken nuggets for a few hours, but if you plan on keeping them longer than that before cooking them, I would freeze them.

Once they are cooked, you can also refrigerate them, but the humidity in the fridge doesn't do any favors to breaded food. To reheat after being refrigerated, I would use the air crisp function on 400°F/204°C for several minutes to crisp up the outside again.

Can I use this same technique for Chicken Tenders?

Absolutely! Just trim and cut your chicken into the size strips you want and bread them the exact same way. The cooking temperatures and times are also the same unless you are using thick strips and then you may need to add a minute or two.

YES, YES, YES! In fact, that is why I started testing this recipe. I didn't have plans to release an Air Fryer Chicken Nugget recipe, only a boneless buffalo wing version. However, they were so good plain, I had to do both!

You make up the Air Fryer Chicken Nuggets and then toss them in any kind of wing sauce you want. A favorite of ours is the sauce on these Asian Sticky Wings. I also whipped up this buffalo sauce that is probably the best I have ever tasted.

How to make Air Fryer Chicken Nuggets in the Ninja Foodi

First, trim up the chicken and cube it into bite-sized pieces. You can either use whole chicken breasts or chicken tenders for this recipe, but either usually require a little trimming to get the best result. If you want to watch me do this, you can take a look at the video: Air Fryer Chicken Nuggets in the Ninja Foodi

Once all the chicken is cubed up, get started on your breading station. Whenever breading anything, I like to have at least 2 shallow containers that contain the wet batter and the dry breadcrumbs. Recently I picked up this Coating Tray Set from Pampered Chef and I have to say, I love it! It's funny because the first time I saw it, I thought it was such a waste of money. Come on now, I have shallow containers why would I need those? The tool! The tool alone is worth the money!

I love to cook, but I hate to get my hands covered in food. I know, it's weird. I can dig in dirt all day long and be happy as can be, but let me get some wet batter on my hands and I'm running to the sink FAST. So, breading foods is one of my least favorite things to do. This set makes it pretty convenient, I must say and definitely worth considering if you do a lot of breading of foods.

Once the chicken is cubed, get the wet batter mixed up. This is very simple, but there is a technique to it. It is important to use a cold egg and cold water and not to overwork the batter. This is similar to mixing up a tempura batter because we don't want to develop the gluten in the flour. The cold water and cold egg slows the gluten development. Swirling instead of whisking the batter will also inhibit the development of gluten. Here is a short video showing how I mix up the wet batter.

The reason we don't want the wet batter to develop too much gluten is because we want this to be a light batter so it stays crispy and doesn't get too thick on the chicken nuggets.

Tempura batter is usually kept a little lumpy, but we want a smoother batter for these Air Fryer Chicken Nuggets. Add the cold water to the shallow container and crack the egg into the container. Sift in the flour (to reduce lumps) and then take a fork and swirl the batter until the egg, water, and flour is mixed together.

Combine the breadcrumbs with the salt and cayenne pepper if you are using it. The cayenne pepper doesn't add a whole lot of heat, but it does bump up the flavor. You could also add any kind of seasoning you think you would like.

Dredge the cubed chicken in the wet batter and then coat completely with the breadcrumbs. Set the breaded chicken on a cooling rack until you are ready to air crisp them. Usually I preheat the Ninja Foodi with the basket in for 10 minutes on broil while I'm breading the chicken.

Spritz the basket with a little oil. You can use whatever oil you like. I used canola oil. Add the chicken nuggets in a single layer and make sure they aren't touching each other, spritz the top with oil. Air Crisp on 360°F/182°C for 5 minutes, and then flip. Continue Air Crisping for another 3-5 minutes or until they are golden brown and the internal temperature is at least 165°F/74°C. Remove and place on cooling rack until ready to serve. I like to put them on a cooling rack instead of a plate, so the bottoms don't steam and lose their crunch. 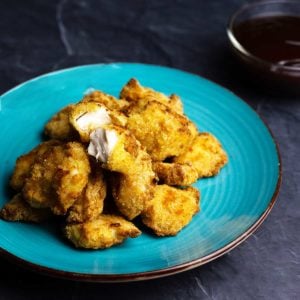 Seeing the need for easy, delicious, and high quality recipes, she is focusing all of her efforts creating recipes specifically for the Ninja Foodi. Her recipes are easy for the home cook to follow and provide step-by-step instructions.

She is very responsive to messages and eager to help in any way she can.

I WOULD LOVE TO SEE WHAT YOU ARE COOKING UP IN YOUR NINJA FOODI! TAG ME @THESALTEDPEPPER ON YOUR FAVORITE SOCIAL MEDIA PLATFORM WHEN YOU MAKE A DISH!