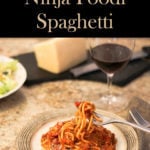 This is the EASIEST and TASTIEST Ninja Foodi Spaghetti Recipe for sure! It's pretty much fail-proof too, which makes it a perfect recipe for the beginner Ninja Foodi operator.

Spaghetti in the pressure cooker is supposed to be an easy, delicious, quick meal and this Ninja Foodi Spaghetti Recipe is just that!I really wasn't sold on Spaghetti in a pressure cooker. How can you develop flavors in such a short time? Won't the noodles be soggy? I was so afraid it would taste like canned spaghetti and we don't like canned spaghetti in our house at all. Still, I wanted to give it a try. If it turned out right and tasted good, this would be such a time saver!

I made a few different pressure cooker recipes from reputable recipe creators and was quite shocked at how dry the spaghetti was (like no sauce) or it was so watery, it had no flavor. That is not how I like to eat spaghetti and my guess is, that's true for you too. I wanted it to taste just like I cooked the sauce on the stove and boiled the noodles separately. You know, traditional spaghetti; just in a fraction of the time!

So, I set out to create the easiest and best tasting Ninja Foodi Spaghetti Recipe using a few simple ingredients and here it is!

While this recipe is a dump and cook spaghetti recipe, the order in which you dump the ingredients does matter.

Cooking under pressure: Whenever you are cooking under pressure, you have to have a thin liquid in order for the pressure cooker to be able to build up pressure. Tomato, cream, and cheese based sauces are too thick to use as the liquid alone. To add flavor to any recipe, I suggest using a broth or stock instead of water. That is what we are going to do in this Ninja Foodi Spaghetti Recipe and it's delicious!

Avoiding the burn notice: Not only have I had the dreaded burn notice, but I've had friends calling me in a panic when it popped up for them. You can sometimes fix it by just adding in more of a thin liquid; like broth or water. Other times your food has already burned on the bottom and that can be hard to salvage. It is much easier to avoid the notice than fix it and that is what this Ninja Foodi Spaghetti recipe does.

Don't skimp on the thin liquid: My first reaction when reading an Instant Pot Spaghetti Recipe was: I'm not using all that water! I think the recipe called for 6 cups of water and I was convinced my spaghetti would be a watery mess. It wasn't watery, but it was very much lacking in flavor. This Ninja Foodi Spaghetti Recipe calls for 4 cups of beef broth (or you could use chicken or vegetable broth) and you need that much, I promise.

Don't overcook the noodles: I've seen an array of cook times for pasta and they are always overcooked for my liking. Spaghetti noodles should be al dente or have just a bit of a bite to them, not overly bloated and mushy. We don't want them to fall apart in the sauce. This Ninja Foodi Spaghetti Recipe calls for 3 minutes of pressure cooking and you might be tempted to increase the time, but keep in mind that the noodles start to cook while the Ninja Foodi is coming up to pressure

Layer the ingredients as shown: Layering the ingredients is an important part of pressure cooking (for some recipes) and this Ninja Foodi Spaghetti Recipe is an example of that. If we reversed the order of the layers, or stirred everything together like you would on the stove, there is a very good chance that you will end up with the dreaded burn notice.

Criss cross the noodles: When using spaghetti noodles in the pressure cooker, you want to layer them in a criss cross fashion to avoid clumping and to have them cook evenly. You can watch how I do this below or see the whole video on my YouTube video: Ninja Foodi Spaghetti Video.

Let's get to making this Ninja Foodi Spaghetti Recipe

First of all, go ahead and gather your ingredients and dice or chop up the veggies you are going to use. I recommend using an onion for flavor and the rest is your personal choice. If you haven't roasted your garlic yet, go ahead and do that now.

How to Roast Garlic in the Ninja Foodi: Cut the top off of the garlic bulb and drizzle with olive oil, wrap in foil. Put it on the Ninja Foodi rack on the low setting and set the bake to 325° F for 35 minutes.

You might be tempted to skip this step, but I really urge you to give it a go. The roasted garlic infuses so much flavor into the spaghetti, I know you will love it! if you have an aversion to garlic; by all means, skip it.

Place 1lb of ground beef or ground turkey along with the seasonings in the inner pot of the Ninja Foodi. Set the Sauté to high and add onions. Break up the meat with a non-stick friendly utensil. My favorite thing to use is this Mix N Chop from Pampered Chef. Sauté the meat until it is almost cooked through.

Add in green pepper or any veggies you are using. Add in roasted bulb of garlic. A simple tip to get the cloves out of a bulb of roasted garlic is to squeeze from the bottom and the cloves will just pop out.

Don't stir from here on out. For the rest of the ingredients we will not be stirring. Add the can of tomatoes and 3 cups of the beef stock.

Gently press the noodles down into the liquid.

Add the 6 oz can of tomato paste right on top. Don't stir.

After the 3 minutes of pressure cooking are complete. Allow the spaghetti to sit and natural release for another 3 minutes. Make sure the keep warm function is off.

Natural Release for 3 minutes and then manually release the remaining pressure. Open the lid and stir to combine the tomato paste into the sauce. Don't freak out, I know it looks watery. Please don't worry, it will thicken up and become a glorious sauce that looks and tastes like you cooked it all day on the stove. Turn the Ninja Foodi off.

Put down the Tender Crisp lid and let the spaghetti sit for about 5 minutes. This will allow it to thicken even more. Top with cheese if you like.

Ninja Foodi 101: A Facebook Group for those seeking basic knowledge and recipes for the Ninja Foodi.

Ninja Foodi Fresh & Healthy Meals: A Facebook Group for people who want to cook healthier meals in the Ninja Foodi 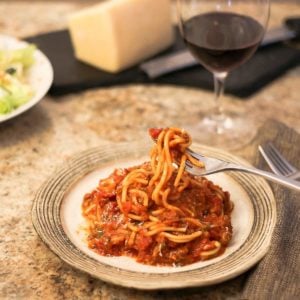 Recipe By: Louise
This is the EASIEST and TASTIEST Ninja Foodi Spaghetti Recipe for sure! You can make it in any pressure cooker too!
4.7 from 63 votes
Add to My Favorites Saved! Print Recipe Pin Recipe
Prep Time 5 mins
Cook Time 3 mins
Time to pressure 8 mins
Total Time 21 mins
Course Dinner
Cuisine Italian
Servings 6 People
Calories 441 kcal
Turn this on when cooking to prevent your screen from going dark

Roasting Garlic in the Foodi

Here are a few more of my favorite Ninja Foodi Recipes if you would like to check them out.