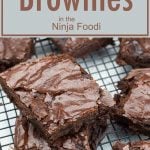 Say what? Slow Cooker Brownies? Why would you slow cook something that can be ready in 30 minutes? Well, because slow cooker brownies are the BEST brownies ever AND there are 3 different ways to serve them! Interested yet? I thought so!

Look at those brownie tops! I get excited everytime I see them because that is the sign of a perfect brownie if you ask me!

I like the flaky top with a fudgy and chewy brownie. If that sounds good to you, then this recipe is for you!

Can I double the recipe?


You could double the recipe, but you will end up with very thick brownies and the cook time would need to be increased at least by a few hours.

Can I make these in the oven instead?


Absolutely! The brownie batter is delicious and would be wonderful to use if you want to skip the slow cook and use your oven.

How should I store the leftover brownies?


I usually let them cook and place them in a sealed container in the fridge for 3-5 days. If you want to store them longer, they freeze beautifully as well.

Can I use a brownie box mix instead?


I don't see why not. Mix the brownies according to the package instructions and proceed with slow cooking. You may need to adjust your time if your box mix makes more batter than this recipe does.

What are the Advantages of Slow Cooking Brownies?

I didn't even know that slow cooking brownies was a thing. It had never occured to me until one day I wanted brownies, but didn't want to stick around the kitchen for 30-40 minutes. So, I thought, why not use the Ninja Foodi Slow Cooker?

I immediately got excited because now my craving for brownies could be an easy Ninja Foodi recipe! YAY!

For me, the biggest advantage is walking away and not worrying about them burning. I love being able to mix up the batter, put it on slow cook and go do other things. I don't have to remember to check on them. It doesn't matter if they sit in there for 5 hours instead of 4. If I turn the keep warm function off, I can let them sit in there for hours and hours after they are done slow cooking.

Another huge advantage is the flavor and texture of these brownies. They are so shockingly good that I'll never look at a baked brownie the same way again. Seriously, these are the PERFECT brownies!

If you have never tried slow cooking brownies, give it a try and I bet you'll be hooked like me!

What Type of Chocolate is best for Brownies?

Personally, I think the combination of milk and dark is the way to go. There is a deep chocolate flavor and the perfect amount of sweetness.

Can I Add Various Ingredients to the Brownie Batter?

Sure! You can really get creative with brownies and make them with different add ins.

If adding a wet ingredient, make sure to drain off the excess liquid first. I would probably limit the amount of add ins to about 1-1½ cups total.

Some variations of this recipe that I want to try are:

Peanut Butter Swirl: Mix peanut butter with some confectioner sugar and swirl it into the brownie batter before slow cooking.

Speaking of Rocky Road, if you are a fan of the flavor combination, you might REALLY love this fudge! It's quick and easy and made right in the Ninja Foodi!

White Chocolate Cherry: This combination sounds so good to me! You could even add in some almonds. I would use Morello (also called sour or tart)cherries instead of maraschino cherries just because the maraschino cherries are a bit too sweet for me.

Almond Joy: Almonds and coconut are two of my favorite flavors! Definitely toast the coconut and almonds before mixing into the brownie batter for a more intense flavor.

If you are a coconut and almond fan like I am, you will love this easy snack mix!

There are my top picks for adding flavors into the brownies, what combination do you want to try? Let me know in the comments!

Can I use my slow cooker if I don't have a Ninja Foodi?

Yep! You will just have to make a few changes to the recipe and I'll go over that right here.

If you don't have a Ninja Foodi Pressure Cooker & Air Crisper yet, what are you waiting for? It seriously is the BEST small kitchen appliance that I've ever owned. I LOVE LOVE LOVE it!

If you want to learn more about it and what it can do, I go over the various models and function right here: How to Use the Ninja Foodi

Until you get your very own Ninja Foodi, you can make these brownies in any slow cooker with only a few changes.

Most stand alone slow cookers don't have a sauté feature, so, you will have to melt the chocolate and butter either on the stove or in the microwave. Keep the temperature low to avoid overheating the chocolate and if using the microwave, I suggest heating in 15 second increments and stirring in between each cycle.

You can mix the brownie batter right in the slow cooker insert just like I did in the Ninja Foodi recipe.

Set the temp to high and cook for 4 hours. You might want to check on the brownies around hour 3 to see how they are doing. Some stand alone slow cookers cook a little hotter than the Ninja Foodi, so the brownies might get done a tad faster.

The other thing you won't be able to do right in the slow cooker is air crisp the top of the brownies for a few minutes. You can simply skip this step.

How to Make Slow Cooker Brownies in the Ninja Foodi

If you always use a box mix for brownies, I totally get it. They are hard to beat! However, I must say that this recipe is just as easy as using a box mix and the flavor and texture are simply the best brownies I have ever had!

Turn the Ninja Foodi on high sear/sauté and add in the butter. If you are concerned that you will heat the chocolate too much, you can reduce the heat to medium or even low, it will just take a little longer.

You can either melt the chocolate all the way or keep about 25% of the chips unmelted for some added texture in the brownies.

I turn off the heat when 50% of the chips are melted and stir until 25% more melt from the residual heat. You can also melt all the chocolate and add in more after you finish making the brownie batter. No one will ever complain that you used too much chocolate!

Lightly beat the eggs in a medium bowl. Add in the sugar and oil to the melted chocolate and butter. This will reduce the heat enough that you don't need to worry about cooking the eggs.

One the sugar is mixed in, slowly pour the eggs into the pot while you stir constantly. Add in the vanilla extract and stir.

Sift in the flour ⅓ at a time and stir between each addition.

People are convinced that their food gets done quicker if they seal the lid and that is probably true, but even on slow cook there is a chance that you could build pressure inside the pot and we definitely don't want that or it defeats the purpose of slow cooking.

With the brownies, the concern is not building pressure because you won't produce enough steam even if the valve is sealed. The concern is condensation. As the brownies cook, there might be a little steam produced and it will go right out of the valve when vented. If sealed, it could cool down and turn back to liquid and then fall on the top of the brownies. No one wants soggy brownie tops!

Set the slow cook feature to high and the time for 4 hours. Walk away! YAY!

You can even turn the heat down to low and cook for 6 hours or so if you need more time. If you aren't going to be home after the 4 hours, I would turn the keep warm function off and the brownies will be just fine in the pot for several hours.

After the 4 hours is up, the brownies are done!

Now, the BIG decisions happen. How do you want to eat the brownies?

I like to air crisp the top for 10 minutes on 375℉/190℃. This dries up the top and gives that flaky top that is signature of a PERFECT brownie. 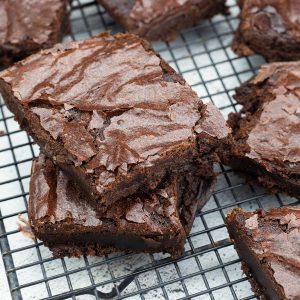