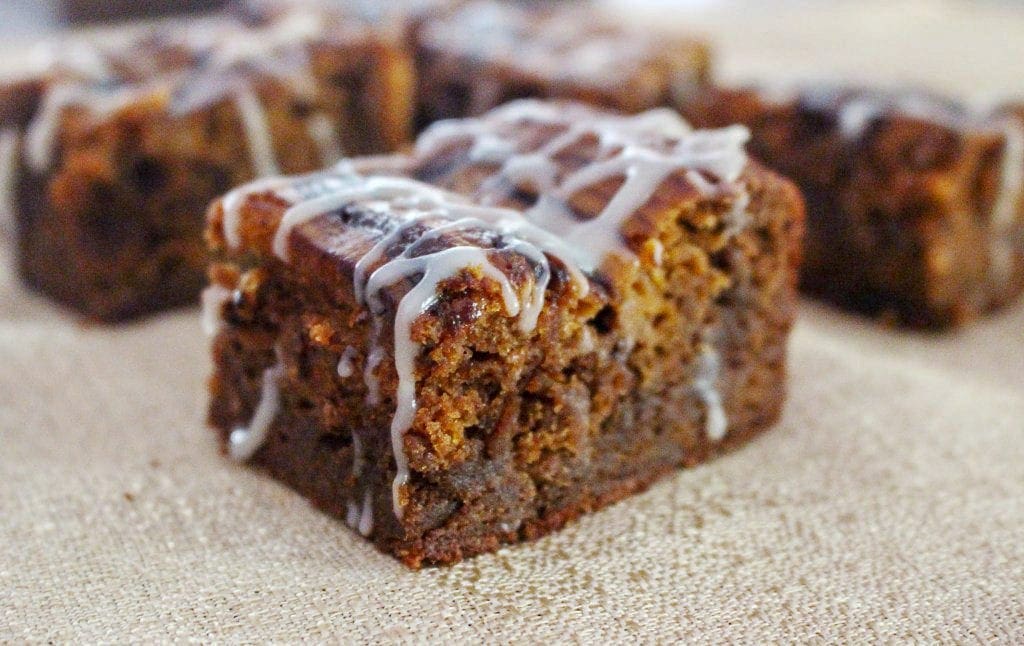 Sugar and Spice and Everything Nice... Ginger Pumpkin Brownies... OH MY!

Yesterday I had an unexpected day off (the best kind!) and it was the first day this month that I felt like Fall was indeed heading our way.

It has been so hot this summer in Maryland, I wondered if any days in September would be below 90 degrees. So... with a day off and Fall in the air; I decided to bake something.

My husband has been asking for chocolate chip cookies for some time, but that will have to wait (sorry honey!). I wanted to create a new recipe and immediately thought pumpkin and/or gingerbread, two of my favorite Fall flavors. Hmmm... why not combine them and make Ginger Pumpkin Brownies!

So, I did some research on the internet and saw where a few people had used a Betty Crocker gingerbread cake/cookie mix and made brownies. I hardly ever use box mix, but I figured I'd be posting the recipe and thought it would make it easier for anybody who wanted to make them. I called a friend of mine and brain stormed with her for a while about these Ginger Pumpkin Brownies and Aimee, the greatest cupcake maker of all time, had a great idea... swirl pumpkin cheesecake batter into the gingerbread brownie batter! Perfect! So off I go to the store to purchase a few ingredients.

I wrote down my recipe (praying it would work) and got to baking. Took tons of pictures of these beauties as they developed into what I was positive was going to be the PERFECT Fall brownie! I hardly even let them cool before I cut one to try... they were good, but far from perfect! Way too cake-like to be called a brownie... so, I was back to the drawing board. I put my thinking cap on and boom, it hit me! I'll make a congo bar batter, flavored with gingerbread spices! The box mix was out the window... sorry guys, it just wasn't meant to be!

What was meant to be.... Ginger Pumpkin Brownies!

This second batch turned out perfect! A little crunch, a little chew, a little fluff and a lot of flavor! The gingerbread and pumpkin both came through in a very decadent way. These little gems are good just the way they are, but... drizzle with the glaze and they will go from very good to absolutely fabulous!

You don't want to miss the glaze!

Now... to make a glaze. I have to admit, I was stuck here for a while. I thought about pumpkin buttercream, no... too sweet and heavy. A simple confectioner sugar and water glaze? No, too sweet. Then, I thought a pecan flavored glaze???? That would be the ultimate combination of Fall flavors! YUM! I just happened to have a bottle of William Wolf Pecan Bourbon... if you like bourbon and pecans, this is a must try! Delicious on the rocks or straight up! I tried to mix the bourbon with confectioner sugar... yuck! Too sweet! Now what? White Chocolate! Sugar and spice and everything nice!

I was meeting some friends for happy hour, so I whipped up some Pecan Bourbon Glaze, dumped it on the brownies that were still warm and took some with me. I am very happy to say that everyone loved them!  Ginger Pumpkin Brownies are my new favorite brownie... Jeff wasn't even upset that he still hasn't gotten his Chocolate Chip cookies! 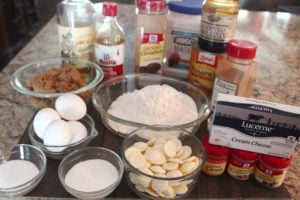 Preheat Oven to 350 degrees Fahrenheit. Gather ingredients for Gingerbread Batter. In a small saucepan, melt butter and shortening over low heat. Add dark and light brown sugar and mix until combined and heat until sugar has been completely blended into the butter & crisco. Turn heat off. Add molasses and vanilla, stir to combine. Allow to cool. While mixture is cooling, combine flour, baking powder, salt and spices into bowl and stir to combine. 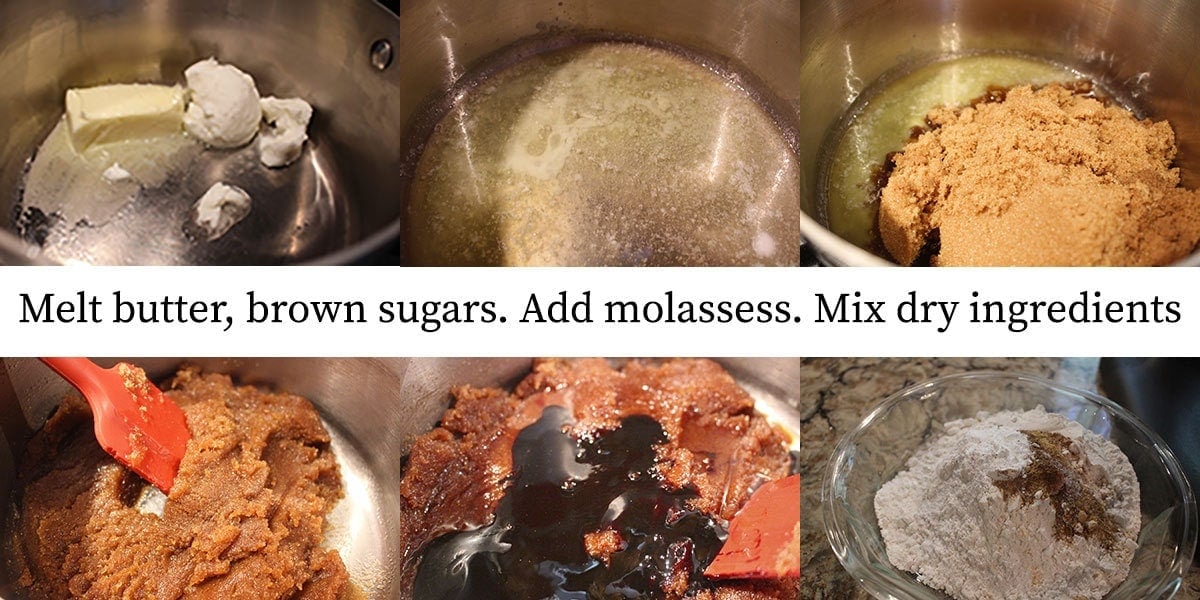 Place the brown sugar/ butter mixture into the bowl of a stand mixer or mixing bowl if using a hand mixer. Turn mixture on low and add one egg at time and beat on low until combined. Add in ⅓ flour mixture and continue to beat on low until flour is incorporated into batter. Repeat until all flour is incorporated into batter. Spray pan 9x13 pan with cooking spray, line with parchment and spray parchment with cooking spray. Spread batter into pan and set aside. 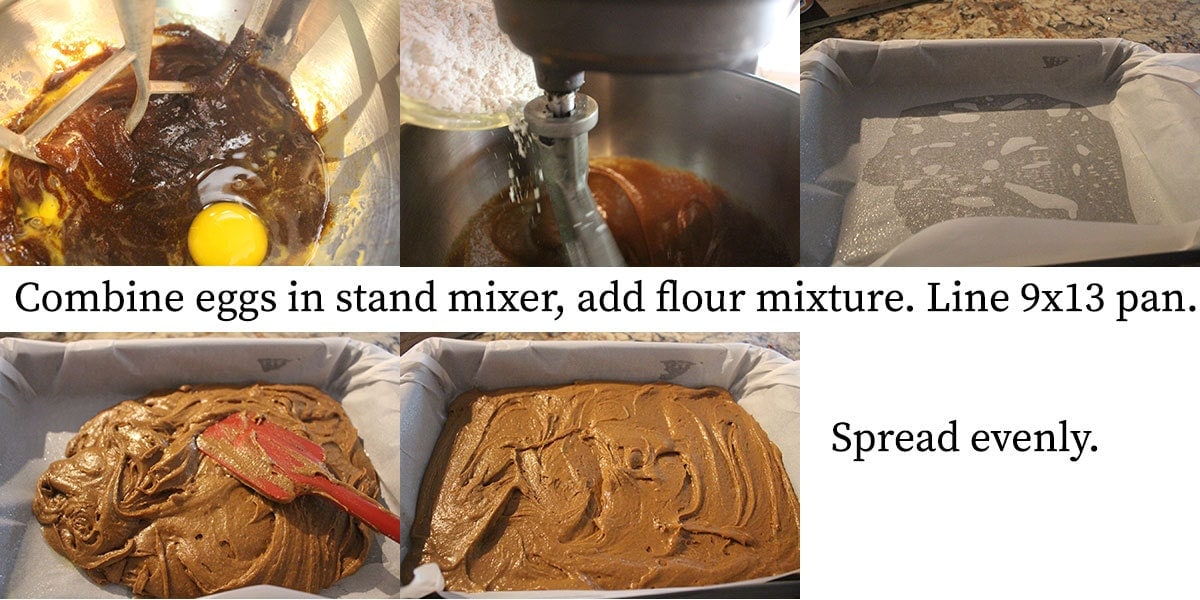 In a small bowl, add softened cream cheese and sugar. Using a hand mixer, beat on low until combined and the cream cheese is smooth. Add pumpkin, salt, spices and vanilla. Beat on low until combined, add egg and mix well. Drop large spoonfuls of pumpkin mixture on top of gingerbread batter. Using a butter knife, move the knife from side to side swirl the pumpkin cheesecake batter into the gingerbread. I move the knife in a zig zag pattern both across the width and the length of the brownie pan. Drizzle 1 Tablespoon of Molasses over the top and make a zig zag pattern with butter knife across and down the pan. Bake in 350 degree oven for 40 minutes. Cool completely on cooling rack before applying the glaze. You can even refrigerate them for a few hours before glazing. 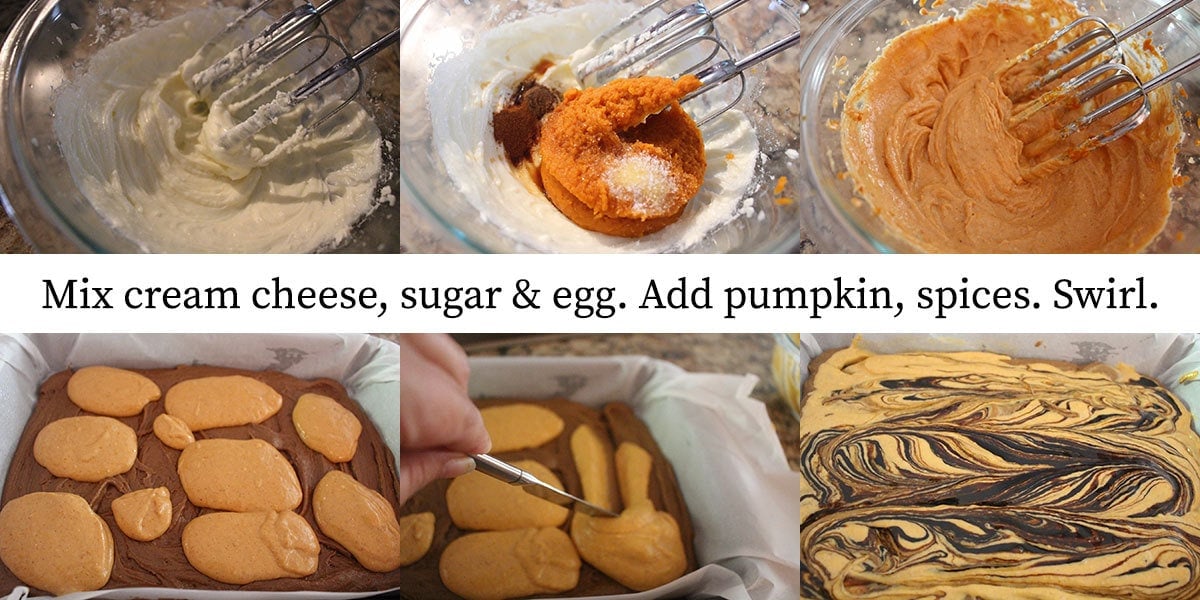 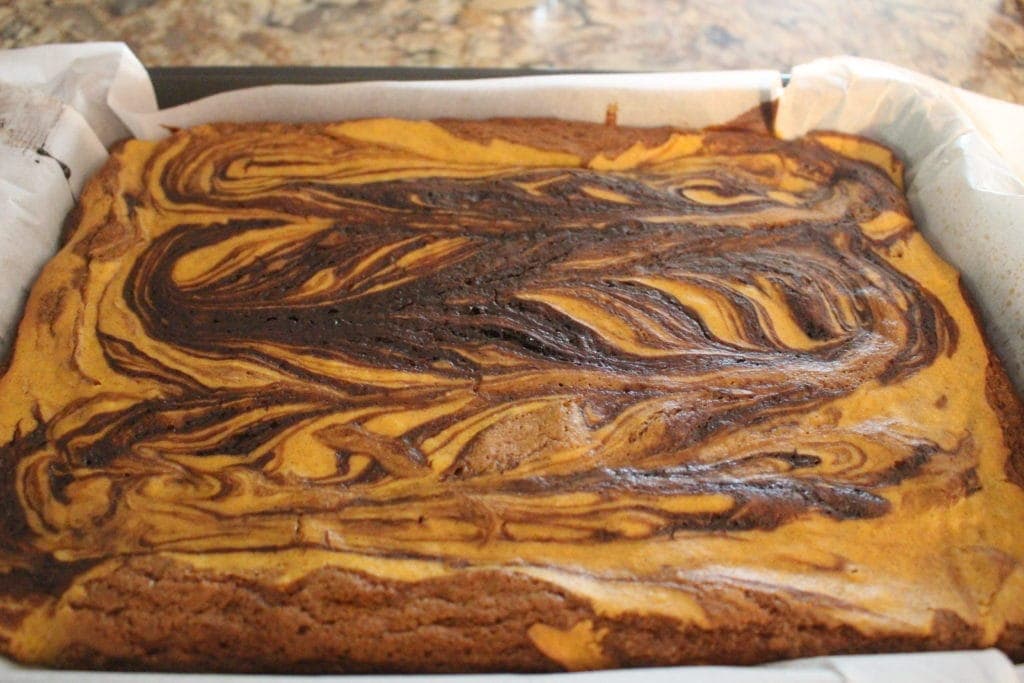 In a small saucepan heat the William Wolfe Pecan Bourbon on medium until it begins to boil, reduce heat to low and allow to simmer until liquid is reduced by half (I forgot to take a picture of this step!). This takes about 5 minutes. Remove from heat and place bourbon in bowl or measuring cup. You should have ½ cup of bourbon. Over a double boiler, heat the white chocolate until melted. Or microwave in 20 second intervals until melted. Do not over heat or the chocolate will seize. Slowly add in bourbon, whisking constantly. You may see clumps start to form, just continue whisking and adding the bourbon until it is all incorporated. The glaze will thin out and the lumps will go away. Allow the glaze to thicken slightly, but use within 2 hours or it becomes difficult to work with. 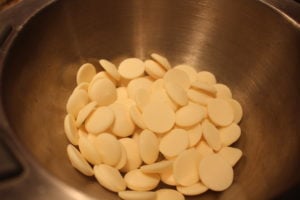 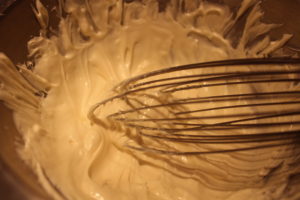 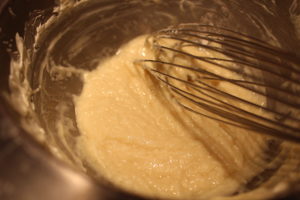 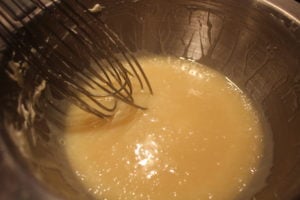 Cut Brownies into squares and drizzle with Pecan Bourbon Glaze. Serve and Enjoy! 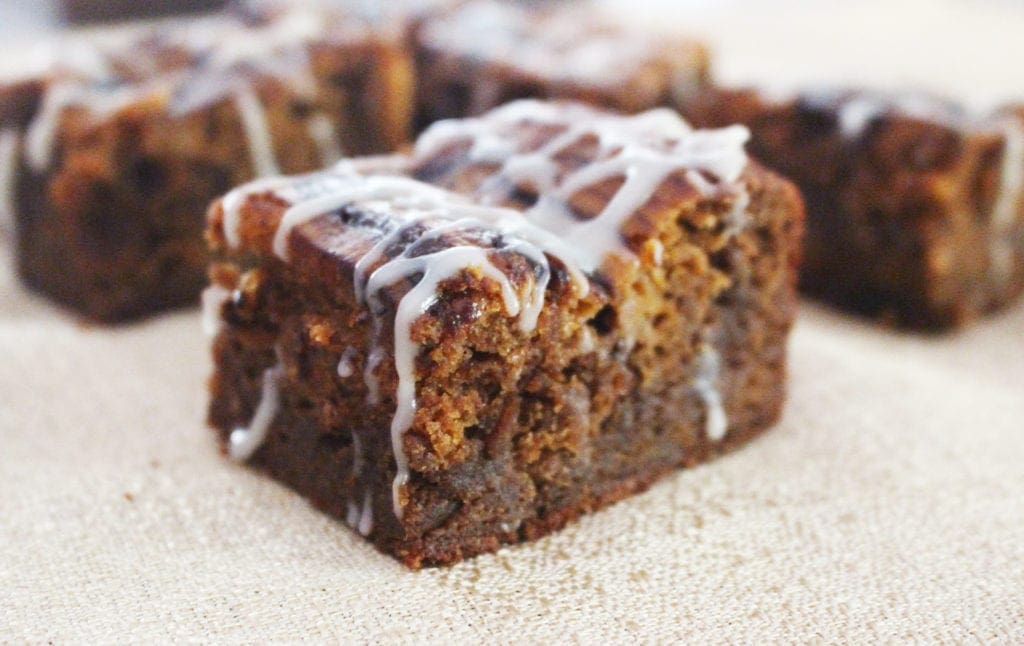 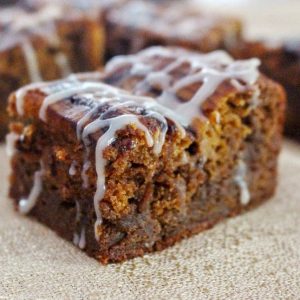