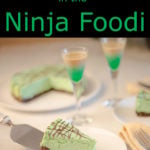 Find What You Are Looking for Quickly Collapse Table of Contents
1 Does Pressure Cooking a Cheesecake save time?
2 Does a Pressure Cooked Cheesecake taste better?
3 Can I make this mint cheesecake in an oven?
4 What if I don't like mint?
5 ARE YOU MAKING THIS RECIPE? YAY! DON’T FORGET TO TAKE A PICTURE AND TAG US @THESALTEDPEPPER ON YOUR FAVORITE SOCIAL MEDIA CHANNEL!
6 Mint Cheesecake in the Ninja Foodi
7 Are you looking for more dessert ideas? Check out these beautiful desserts made right in the Ninja Foodi!
8 DON’T FORGET TO FOLLOW US ON YOUR FAVORITE SOCIAL MEDIA CHANNEL! 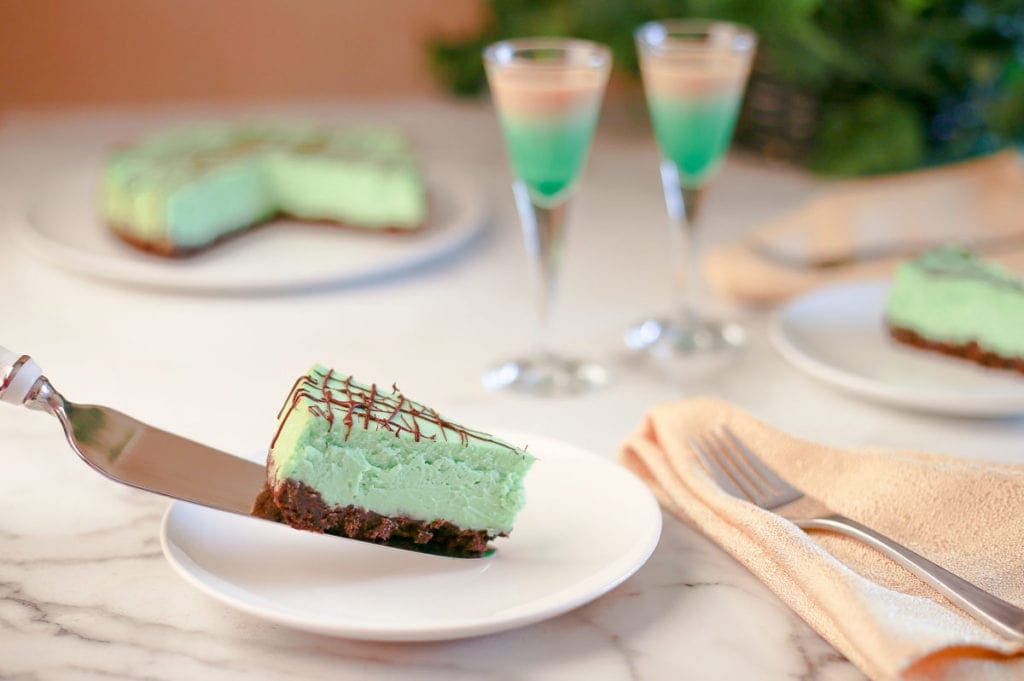 Yep, that's right! It's cheesecake time! Only, this isn't any ordinary cheesecake. Nope! It's a Mint Cheesecake in the Ninja Foodi!

Have you ever had an Andes Chocolate Mint Candy? That is exactly what this cheesecake tastes like and it's quite delicious!

There was a time, many moons ago, that I disliked cheesecake. I'm sorry, but it's the truth. My friends would rave about it, I would try it. No, not so much. In fact, the only time I would ever eat cheesecake anything was when my Mom would make her mini cheesecake bites with cherries on top. Now, those were GOOD!

So, why did I like her mini versions and not the full on cheesecake? Texture & Sweetness. I'm sure of it. Traditional cheesecake is too dense and... well, cheesy for me. I'd rather use that cream cheese and make jalapeno poppers, crab dip or this delicious recipe for Sun Dried Tomato & Chicken Pasta.

I sure did like that sweet cherry topping, though! I think the (almost savory) cream cheese part of Mom's cheesecake just went really well with those super sweet cherries; kind of like baked brie with fruit on top. Okay, I'm a bit fussy when it comes to cheesecake. I admit it. When I think of a cheesecake; I think of a creamy, slightly sweet and fluffy center with a crisp crust. I want a cheesecake that doesn't need the fruit on top to make it taste good. I found my answer with this recipe for Mint Cheesecake in the Ninja Foodi. I just love the Ninja Foodi! Don't you?

I was a bit concerned about how the cream cheese would pair with mint, but it actually works perfectly! Don't knock it until you've tried it; and this recipe is so easy to make... right in your Ninja Foodi!

I always thought cheesecake was hard to make. I'm not sure why, but I had that in my head for the longest time and it couldn't be further from the truth. There are only a few ingredients in a cheesecake and you can whip one up really quick and then let the Ninja Foodi do all the work!

Does Pressure Cooking a Cheesecake save time?

Honestly, no. It doesn't save any time. By the time the Ninja Foodi comes up to pressure and you cook the cheesecake under pressure for 25 minutes with a 15 minute natural release, you can bake one in the oven. That's the truth and that's also why I had never pressure cooked a cheesecake before this one. So, why do it? That's a good question! It tastes better... much better!

Why switch from a known cooking technique to a new one? Curiosity was what did it for me. I saw people raving about their pressure cooked cheesecakes and when I asked in an Instant Pot group what was the big deal, the response I got kind of floored me. A lady told me to just 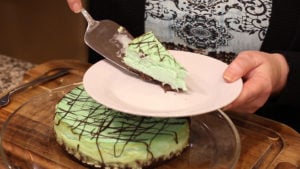 try it. Really? I don't want to try something without having some idea how it is going to turn out. Tell me why it's better. Talk about the texture. Talk about the crust, because I'm positive that it can't end up crisp.

I mean really? We are cooking under pressure in a hot steam bath. Right? That crust has to be soggy and gross. No one was kind enough to enlighten me as to why I should jump in with two feet and pressure cook a cheesecake. I won't do that to you. I'll tell you exactly why you want to pressure cook a cheese cake and especially this Mint Cheesecake in the Ninja Foodi!

Can I make this mint cheesecake in an oven?

Of course! Although, I would really suggest looking into a Ninja Foodi. You will not be sorry! I have made some fantastic meals on the stove and in the oven. I even have a professional grade Blue Star range and I don't use it anymore. When we moved, I told my husband that I had to have my stove installed right away. It is still sitting in our little building outside because I don't even use the stove that came with the house we bought! I use the Ninja Foodi for every single meal... every single day. I love it! If you are interested in reading more about the Ninja Foodi, here is an article I wrote on Getting Started with the Ninja Foodi.

If you don't have a pressure cooker or a Ninja Foodi and want to make this mint cheesecake, here is how you do it.

Pre-heat your oven to 325°F and set a pan of water in the bottom of the oven. Put your cheesecake in the springform pan on the middle or lower rack and bake for 40-50 minutes. Try not to open the oven during the baking time. Every time you open the oven, you let the heat out and that affects the temperature in the oven.

Check it again at 40 minutes and by this time your cheesecake should be almost all the way done. It should look set, have very little browning and the center will jiggle a bit.

Allow to cool on a rack for 30 minutes and then refrigerate the cheesecake for at least 4 hours.

One of the great things about cheesecake is the ability to customize it to suit your taste.

If you don't like mint, just leave out the liqueur and mint extract. Be sure to add in a teaspoon or so of vanilla extract for a boost of flavor.

You can also substitute Amaretto in place of the mint liquor and replace the mint extract with almond extract or vanilla for an almond flavored cheesecake. In fact, this sounds so good... I think I'll work on this recipe!

The possibilities are endless! Get creative and focus on the flavors you like. Just don't add more than ¼ cup of liquid or your batter might be too runny. Have fun and be sure to let me know what type of cheesecake you created!

Okay, my friends! It's time. Let's make a Mint Cheesecake in the Ninja Foodi!

If you'd rather watch me make this cheesecake, you can right on YouTube:

The very first thing you want to do is allow your cream cheese and eggs to come to room temperature. This is extremely important because the softened cream cheese is able to blend better with the sugar and reduces or eliminates lumps in your cheesecake batter. If there are lumps in your batter there will be lumps in your finished cheesecake. They don't go away, unfortunately.

Prepare your 7" Springform Pan. Cut a parchment round and place on the bottom of the springform pan. This will allow you to remove the cake easily from the pan onto a cake plate. It also protects your pan if you want to cut slices right from the pan.

If, for some reason, you don't want to use a chocolate crust, you can certainly go with a simple graham cracker crust or even a vanilla cookie crust.

Let's make the filling. In a large mixing bowl, combine cream cheese and sugar. Using a stand mixer or a hand mixer, blend until sugar is combined and cream cheese is smooth.

Add one egg at a time and blend on low to medium speed to incorporate the first egg before adding in the second egg. You don't want to over beat the cream cheese mixture, but you do want the eggs to be well incorporated 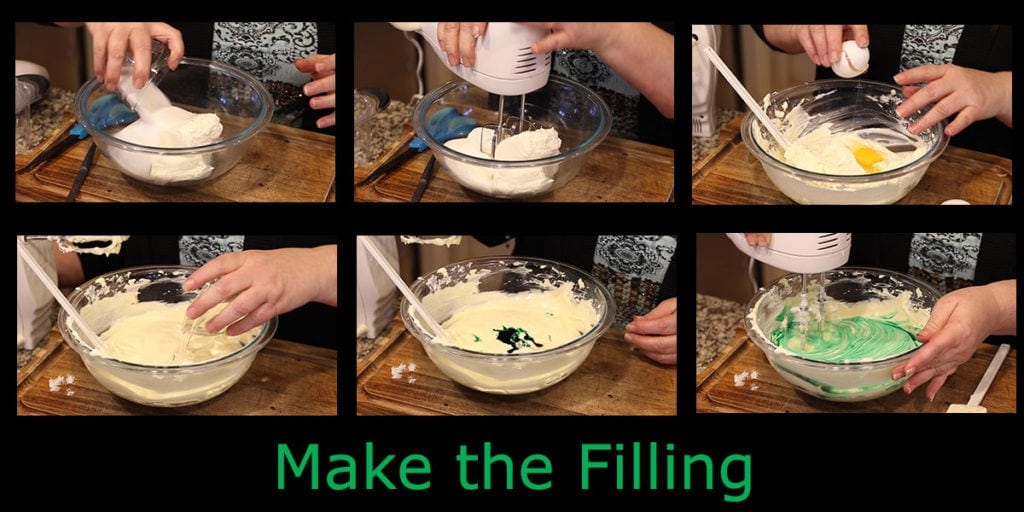 Add in Crème de Menthe, mint extract and 10 drops of food coloring. Blend on low speed until combined and uniform in color. Pour filling into the crust.

Place a paper towel on top of the springform pan (not directly on the cheesecake) and cover with aluminum foil. Don't skip this step. It is important to help reduce the moisture on the top of the cheesecake during pressure cooking.

Uncover the cheese cake and dab any extra moisture that has collected on top of the cheesecake. Place in the refrigerator for at least 4 hours. 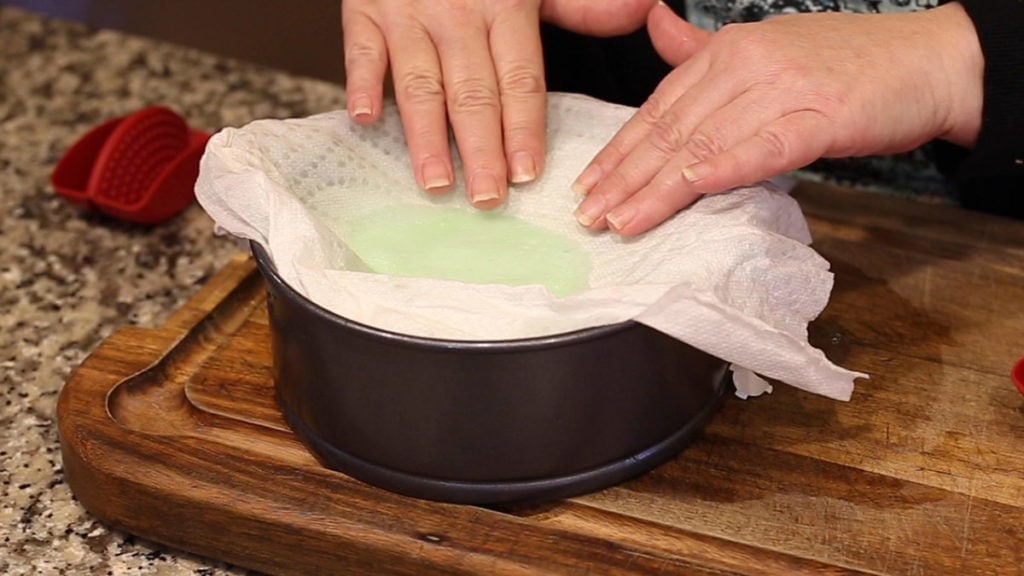 When chilled, melt some dark chocolate and decorate the top of the cake with any design you like. What I did was get an even flow of chocolate off of the spoon and then moved it back and forth across the cake top in alternatingmotions. Pop the cake back into the fridge for just a few minutes until the chocolate is set. 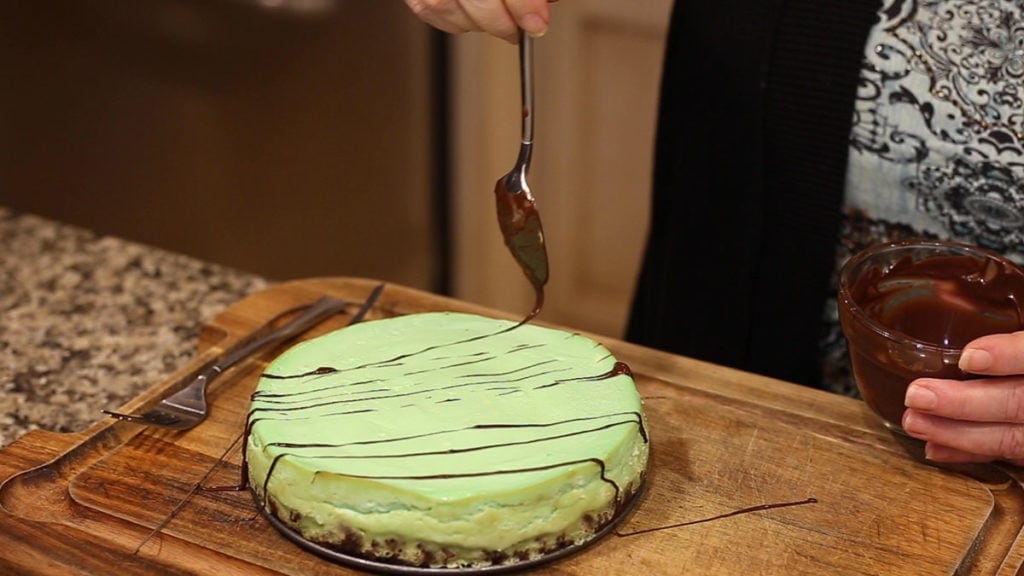 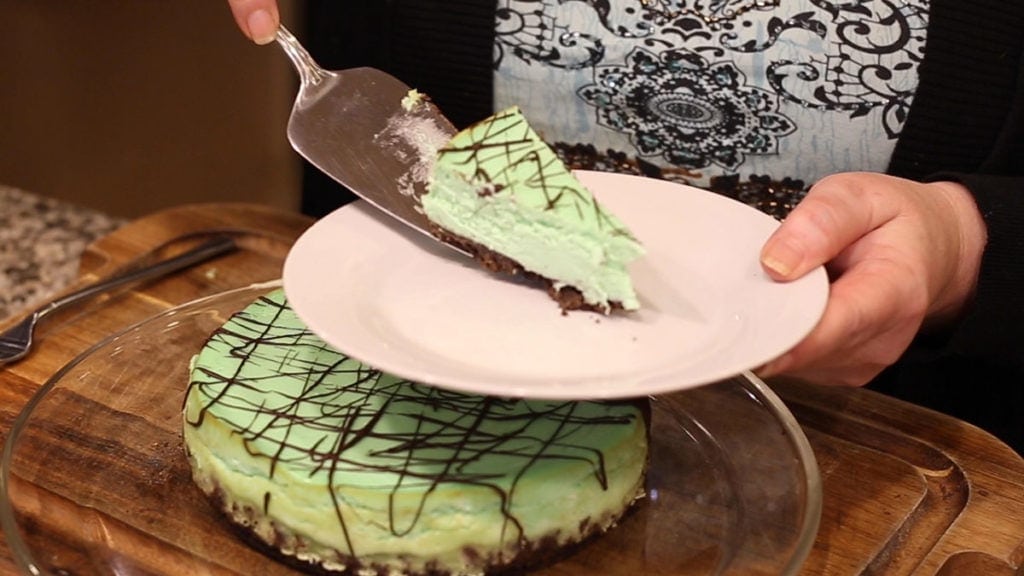 ARE YOU MAKING THIS RECIPE? YAY! DON’T FORGET TO TAKE A PICTURE AND TAG US @THESALTEDPEPPER ON YOUR FAVORITE SOCIAL MEDIA CHANNEL! 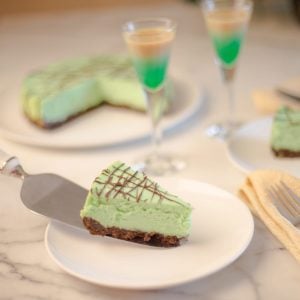 Mint Cheesecake in the Ninja Foodi

Recipe By: Louise
Oh my, you are in for a little slice of heaven with this delicious and minty cheesecake. It reminds me of an Andes Candy!
4.43 from 7 votes
Add to My Favorites Saved! Print Recipe Pin Recipe
Prep Time 5 mins
Cook Time 45 mins
cooling time 4 hrs
Total Time 4 hrs 50 mins
Course Dessert
Cuisine American
Servings 12
Calories 268 kcal
Turn this on when cooking to prevent your screen from going dark

Are you looking for more dessert ideas? Check out these beautiful desserts made right in the Ninja Foodi! 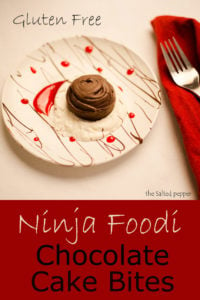 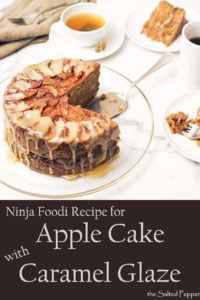 DON’T FORGET TO FOLLOW US ON YOUR FAVORITE SOCIAL MEDIA CHANNEL!

YOU CAN FIND THE SALTED PEPPER RIGHT HERE ⇓⇓⇓⇓